There has been much discussion on the forum about which boot is wider, which boot has a narrower heel, and so on.
We decided to let the proof be in the truth, so we sacrificed 3 pairs of boots to see what we could find.

The first thing we did was do a volume test with sand.  We sectioned off the base of the boot above where the foot sits so that sand would not go here, and interfere with the volumes. We then filled the boot with sand to 3 inches. 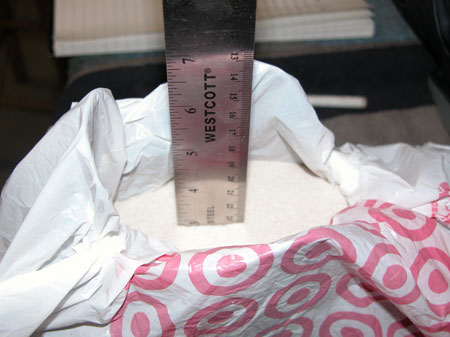 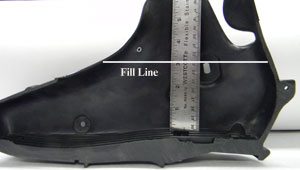 We poured the sand out and weighed it, and then multiplied that weight with the constant (.75 lbs = 200 cc) to get the following results:

We then cut each of the boots in 1 inch equal slices so they resembled a loaf of Wonder bread.

Then, starting from the rear of the boot we measured the interior left side of each piece in two places. The first was the lowest we could go to the bottom of the boot while still being flat, symbolizing where the bottom of your foot would lay on the plastic insert (if there was one – removed for this experiment).  The second measurement was taken 2cm above that line to symbolize where the widest part of the foot would lie inside of the boot.

Keep in mind that some of the boots had a longer profile, so they had more pieces. This also means that the smallest piece of that boot may not equal the smallest piece of another boot that had less pieces. For ex, the Deeluxe boots have 11 pieces. The piece #11 is much smaller than the piece #10 of the Head or UPZ boot, so it might be wiser to compare piece #10 of the Deeluxe with piece #9 of the Head.

The skinny, in table format (measurements in cm):